During Special Interest Days (Study Days) members have the opportunity to look at a subject in more depth than is possible in a lecture. The group size is often smaller which can allow for a more informal approach. 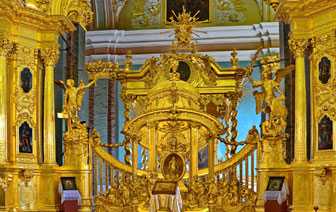 While the names of the great Russian writers and composers are household names – Dostoyevsky, Chekhov, Tchaikovsky, Prokofiev – the artists that worked alongside them remain relatively unknown; indeed, there is not a single Russian painting in the National Gallery. This study day will explore the neglected story of Russian art.

The story begins in the 10th century when Prince Vladimir of Kiev converted to Orthodox Christianity and brought the sacred art of icon painting from Byzantium to Holy Rus. Here it developed into a highly distinctive form of art, closely adapted to the temperament of the people and the resources of the land. For several hundred years the icon remained the dominant type of image in Russia, deeply couched in the rich and evocative atmosphere of the Orthodox Church.

It was not until the reign of Peter the Great at the beginning of the 18th century that Russia experienced anything resembling a ‘Renaissance’. This development is the theme of the second lecture. Peter’s most powerful statement was to sever ties to tradition, which were enshrined in ancient Moscow, and to build a new city - St. Petersburg, a window on to the West. For over a hundred years, Russia shoe-horned itself on to the stage of European politics by adopting and adapting the cultural conventions of western Europe. These included the ‘novel’, the ‘symphony’ – and ‘oil painting on canvas’.

But by the end of the 19th century, increasing numbers of Russians began to feel that their country had sold its soul to the West and there started a movement to define a distinctively Russian form of cultural life that matched the experience and aspirations of modern society. As explored in the third talk, many individuals looked to ancient traditions for precedents that would help them achieve this end. Among the many manifestations of change that occurred during these momentous years was Kazimir Malevich’s ‘Black Square’ (1915), painted on the eve of the Russian Revolution, and opening a new chapter in the history of Russian art.

Organised by: The Arts Society Falmouth 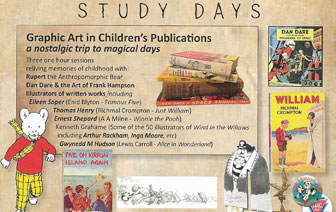 Three one hour sessions reliving the memories of childhood.

Rupert’s centenary was in 2020. This lecture is the fascinating back- story of how and why Rupert was created, exploring the folklore and dark influences on his initial adventures.

Eagle was the creation of a vicar, Marcus Morris, and an art student Frank Hampson. This lecture reveals why and how they did it selling nearly one million copies at launch.

You don’t have to be a sci-fi fan to appreciate how Frank Hampson set up the most extraordinary studio in 1950 to produce Dan Dare and see what lengths he went to in creating award winning artwork.

Why did the Ministry of Defence order 6 copies each week? See how Dan Dare got there first with many space inventions that we now take for granted.

Eagle influenced millions of boys (and girls) and inspired many future leaders and artists.

This session looks at illustrators of written works including,

Organised by: The Arts Society Falmouth