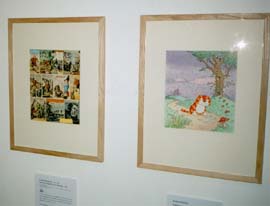 The Arts Society Falmouth is the most southerly society in Britain, situated in a county that is extremely rich in artistic tradition and also has a flourishing contemporary art life. There is a great interest in all aspects of art among people living here - something that is reflected in the success of our society, which is very active and has enthusiastic and supportive members.

We held our Inaugural Meeting on 13th October 2000 with a Founder Membership of 212. By the end of the first year we had a waiting list of 75 and felt confident enough to increase our total membership to 230. Membership currently stands at 400, and over 200 of those members came to the 10th anniversary event in October 2010. 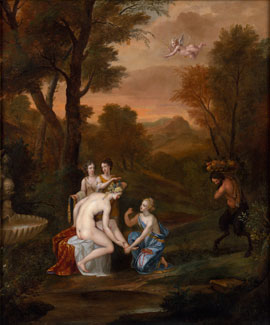 The Arts Society Falmouth has been involved with various art projects in the local community. For several years we funded an award to students in the new 20th Century Art and Design course at University College Falmouth (formerly Falmouth College of Art), which was presented for the first time at our AGM in 2003. In addition we funded a Young Arts project for pupils at the Falmouth School.

We have also been supporting, together with University College Falmouth, a Children's Illustrations Archive at the award-winning Falmouth Art Gallery. The archive was created in December 2004, and The Arts Society Falmouth has funded some purchases of children’s book illustrations, adding to an already existing collection in the gallery. It is hoped that the illustration archive will also attract gifts from professional illustrators.

In 2010 the society donated £1,000 to the Falmouth Art Gallery which enabled the gallery to ‘unlock’ the main sum from the Art Fund to acquire the painting entitled Innocence by Thomas Cooper Gotch (1854 – 1931). In 2012 we made a small contribution to help with the acquisition of Anne Killigrew’s ‘Venus attired by the Three Graces’.

During the summer of 2012 we donated £2,000 to the National Maritime Museum, Falmouth to enable the creation of a Museum Assistant (Graduate Trainee) work placement. The key barrier to any young person gaining a job within the heritage sector is a lack of experience, specifically a lack of initial paid experience. The graduate trainee work placement was a new initiative by the Museum that aims to address this issue by providing invaluable experience, knowledge and transferable skills to a young person at the start of their career.

In 2015 we supported the Kennall Vale School Young Arts Project, where the students were engaged in the design and creation of signage to put on the classroom doors.

In 2016 we funded Spectrum, a local charity who work to support people and their families living with autism, to employ a London-based street artist. The outcome was a colourful mural painted in a tunnel leading up from the quay car park to Church Street in Falmouth.

The Society currently has four active groups of Heritage Volunteers :

A group of Heritage Volunteers worked at the Helston Museum Costume Department from October 2003 until 2013 recording, classifying and caring for the museum's large collection of period costumes.

A Church Recording Group has completed the records of five local churches and is currently identifying another project.